If you lose your VPN connection at regular intervals like I do, like when the PC goes into Standby Mode for example, or the connection simply drops for no apparent reason, then it is nice to know that a small application, running in the system tray, has got you covered.

In this picture the PPTP VPN connection is being monitored. 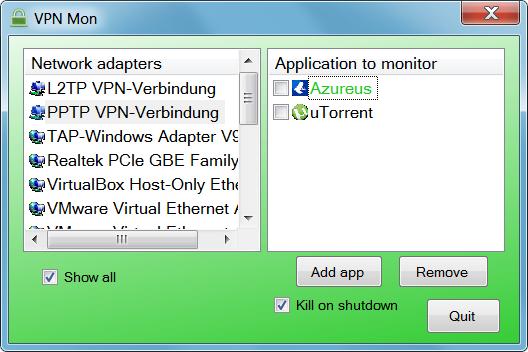 The PPTP and L2TP connection status is not normally shown in the system tray, unlike like it is with OpenVPN.

The VPN Monitor program can be minimized to the system tray and shows connection status via its icon, here the green padlock icon next to the connected OpenVPN icon

and here when the connection has dropped and is no longer encrypted  through a proxy.

The VPN Monitor background color and taskbar icon also reflect the status of the selected VPN connection, if it is not minimized.

In the next picture, it shows that the VPN connection has been lost, and Grabit has been terminated, marked in red.

The tick boxes mark the programs to be started automatically as the VPN Mon program starts.

All running programs will be killed when the Monitor program closes, if the tick box ‘Kill on shutdown’ is set 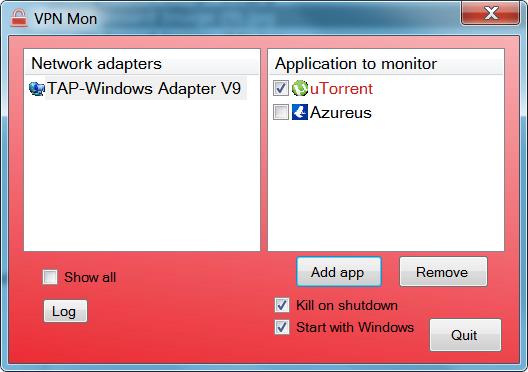 The program can be set to start with windows automatically, and will then start any programs in the list marked with a tick

For those that are interested in the connection history, a log file is kept showing connection status.

The application doesn’t continually scan the network connections wasting processing power like similar programs do, but instead is informed by the System by interrupt, that the network status has changed.

The selected VPN connection status is then checked whether it is down.

If it is then within a few milliseconds, all the selected apps are terminated.

When returns, all the terminated apps are restarted.

This program does not suspend and resume the running of programs.

This very dubious function was discontinued by Microsoft more than a decade ago, due to the amount of damage it can do when implemented.

If you have Win 10 then please try the free version first. I have heard it crashes randomly.

Here is a link to the DotNet Framework 4 installer

The program is available in two versions.

The free version which only monitors and kills one application, and the full version which allows unlimited programs to be monitored and killed.

Here is a link to the free version

and here is the full version for 5 Euro, which is almost free isn’t it.

Purchase the program  for only 5 Euro with PayPal Secure Transaction 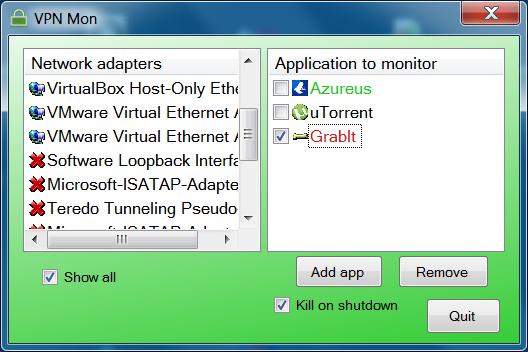 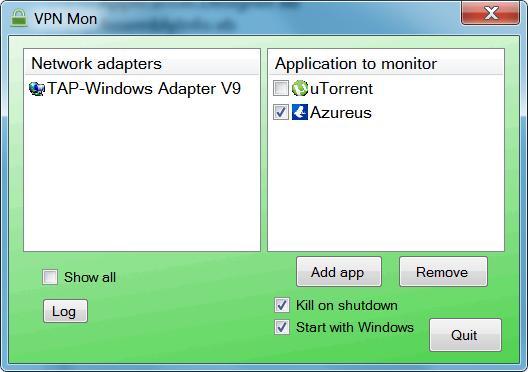